In 2007, the webseries Statler and Waldorf: From the Balcony won a People's Voice Webby Award. The series' nomination, in the "Comedy: Long Form or Series" category, was Movies.com's first nomination for a Webby. On May 1, 2007 it was announced that From the Balcony was the winner of the People's Voice 2007 Webby for "Best Comedy Long Form or Series."[2] As such, all 34 episodes of the original series have been archived as a permanent part of the video collection of the Museum of Moving Images.

The Muppet duo accepted the honor at the live awards ceremony on June 4, 2007 -- Statler appeared live at the event, while Waldorf reported in "live" from vacation. 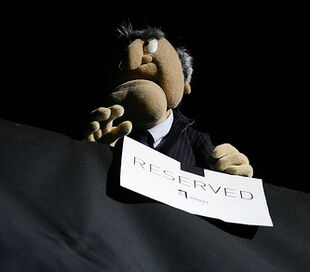 Statler, live at the 2007 ceremony 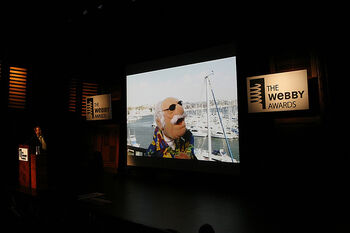 Waldorf reports from his vacation 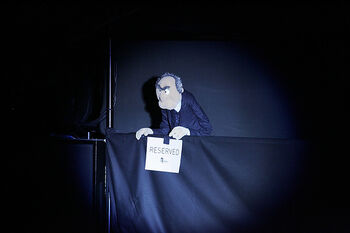 Statler live at the event 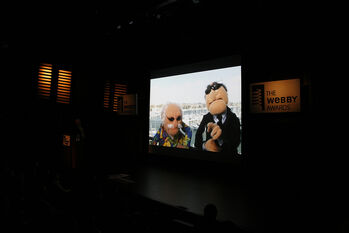 Statler joins Waldorf on his vacation

The Muppets' "Ode to Joy" music video (featuring Beaker) won the People's Voice Webby Award for "Best Music Video" in 2009.[4] Soapbox Films created two additional videos to help raise awareness of their nomination and encourage voting. Beaker appeared live to accept the award at the June 8th ceremony. Beaker gave the traditional five-word speech with his typically catastrophic results. He was also interviewed on the red carpet by Shira Lazar.

The Muppets' "Bohemian Rhapsody" won the Best Viral Video Award along with the Best Music Video award, also winning a People's Voice award for both videos in 2010. Floyd Pepper and Animal appeared live to accept the award. As soon as they were given the Webby, Animal promptly ate it. Floyd delivered his five word speech: "Another Webby Bites the Dust," a reference to the Queen song, "Another One Bites the Dust," which played in the background as the Muppets left. The two also appeared in a backstage video with OK Go where they held a staring contest.

The Squarespace ad campaign starring Oscar the Grouch won People's Voice Awards for "Products & Services" and "Branded Entertainment: Scripted." For this year's "from home" ceremony, Oscar begrudgingly delivered his five-word acceptance speech, reading "Thank you" from a paper before crumpling it up and exclaiming "Have a rotten day!" Cumulatively, Oscar said six words.[1]