The Wild Impresario is one of the residents of Faffner Hall. He first appeared in the first episode of The Ghost of Faffner Hall. A pianist, he is very enthusiastic about working at Faffner Hall, and loves music of all types. Whenever he hears something very appealing to him (or comes upon a great idea), he often describes it as the "_____ of the Century!"

In the second episode, "Delighting in Sounds", it's revealed that Wild used to be in a gang called the Wild Bunch. He used to date one of the gang members, a woman named Zola. Before Zola, Wild dated Joni Mitchell. When Zola paid a visit to Faffner Hall, Wild wanted to rekindle their old romance. Then he found out that Zola had married Ray, another former member of the Wild Bunch.

In "Notation: The Sign That Gets the Sound", Wild creates the winning composition for a contest that's being held in Faffner Hall. 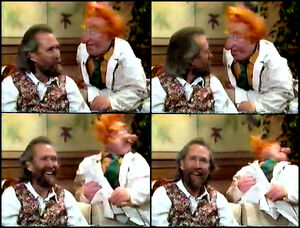 Jim Henson and The Wild Impresario
Add a photo to this gallery
Retrieved from "https://muppet.fandom.com/wiki/The_Wild_Impresario?oldid=1223583"
Community content is available under CC-BY-SA unless otherwise noted.