The Wizard of Id appeared in The Wizard of Id pilot and is based on his comic strip counterpart, albeit with an orange nose. He utters his catch-phrase from the strip, "Frammin on the jibjab, frippin on the krotz", causing The King of Id to explode.

The puppet has since been given to The University of Connecticut's Ballard Institute and Museum of Puppetry, where it was on display in 2013 after being donated from The Jim Henson Legacy.  For a while, the puppet appeared while missing its nose, but a replacement was built by Bonnie Erickson and reattached in the summer of 2013. 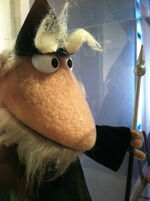 Wizard of Id on display at UConn's Ballard Museum, before a nose addition. 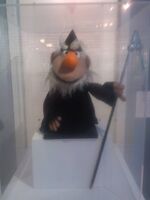 The Wizard, with his nose. 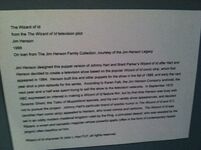 Curator's Notes for The Wizard
Add a photo to this gallery
Retrieved from "https://muppet.fandom.com/wiki/The_Wizard_(Wizard_of_Id)?oldid=1078992"
Community content is available under CC-BY-SA unless otherwise noted.