The Worm is one of the inhabitants of the titular maze in Labyrinth. A cheery fellow with a Cockney accent and colorful scarf, he makes his home inside one of the labyrinth's walls, where he encounters Sarah. The worm, in addition to repeatedly asking her to tea to meet his wife, informs Sarah of the walls which have hidden openings. He also inadvertently misdirects Sarah, concerned that she keep away from "that castle."

As reported by puppeteer Karen Prell on her website, the worm existed as both a finger-sized rod puppet and a larger scale hand puppet, for use in close-ups. The body, head and mouth were manipulated manually, while radio controls operated the eye movements and blinks. 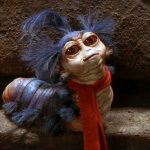