The Year of Roosevelt Franklin

The Year of Roosevelt Franklin (Gordon's Friend from Sesame Street) is the first Sesame Street album to focus on one character. The songs deal with many different subjects, from learning letters and numbers, to traffic safety, sharing, and getting along with other people. It was subsequently reissued as My Name is Roosevelt Franklin in 1974.

All of the tracks on the album were co-written by Matt Robinson and Joe Raposo, with Robinson writing the lyrics, and both of them collaborating on the music.

The album was made available for the first time on CD on the 3-disc set Old School: Volume 2 in 2010, along with Grover Sings the Blues and The Count Counts.

The back of the album includes quotes from well-wishers:

John V. Lindsay, Mayor - City of New York: "Children are not born with racial prejudice - they learn it. From Roosevelt Franklin they can learn other things instead - tolerance and understanding and friendship for each other. This album is a delightful, constructive contribution to the struggle from understanding and equality."

Barbara Walters, Today Show - NBC-TV: "Roosevelt Franklin not only delighted my two-and-one-half year old, but more important, it should help her, and all of us, live in a happier, more understanding world."

Ed Sullivan: "As a grandfather of five I recommend it! Not only to the nation's youngsters, but to their parents as well. It offers something to people of all races and all creeds."

B. B. King, ABC Records Recording Artist: "I really enjoyed this LP when I heard it. I wish albums like this would have been available when I was a kid in Mississippi."

U.S. Congressman Shirley Chisholm: "Roosevelt Franklin brings together children, black and white, fat and thin, shy and bold. They are natural children untouched by the polluted minds of adults. It is beautiful."

Ed McMahon: "This recording is vibrant... it is with it... it is educational but above all it teaches tolerance for others and love for all. That's a big order beautifully fulfilled."

Mrs. Minerva Rosario, Kindergarten Teacher - PS 115: "Very lovely, modern, exciting beat throughout the record. The children love the rhythm of it. It made them feel like dancing."

Maratia Cantarella (Age - 3 years) Brooklyn, N.Y.: "I want to hear. You know, Mama, I want to hear the Roosevelt Franklin record. Do it again, Mama, please. Make it some more."

The back covers and inside gatefold of this album in both releases contain a variety of artwork and commentary on the album.

The Year of Roosevelt Franklin inside gatefold. 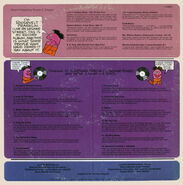 The Year of Roosevelt Franklin back cover.

My Name is Roosevelt Franklin partial back cover. 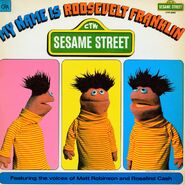 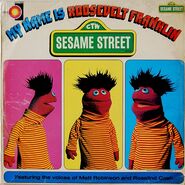 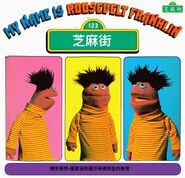