The Adventures of Thelma Thumb was a series of animated segments on Sesame Street, first introduced in season 9. Designed to teach pre-science concepts, the series was produced by John Korty using his Lumage system, which utilized fabric cut-outs.

The central character was Marcia Middlewell, a seemingly average girl who harbored a secret alter-ego. When accidents appeared inevitable or other trouble spots occurred, Marcia would enter a phone booth. With the utterance of her magic phrase, "Zapper jiffy squincher scrum, make me into Thelma Thumb!", she would shrink to the size of a salt shaker and fly to the rescue. Thelma's size allowed the segments to examine objects and places from a unique perspective. Also featured was Marcia's pet magpie, Cyrus, designed by Brian Narelle. As with other Korty shorts, the dialogue was partially improvised by San Francisco-based actors; Judith Kahan supplied the voice of Marcia/Thelma, and James Cranna was Cyrus.

The segments remained in rotation on the show through season 14, but they still occasionally surface in the Netherlands, on Sesamstraat. Marcia Middlewell/Thelma Thumb is renamed Marijke/Selma Duim and voiced by Marijke Merckens. Cyrus, now Kobus Kraai, is voiced by Sesamstraat voice veteran Paul Haenen. In Spain she was renamed Espita Gorgorita/Pepita Pulgarcita, and in Germany she was called Däumelinchen (Thumbelina). 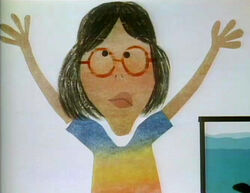 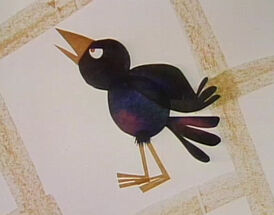 The cynical Cyrus
Add a photo to this gallery

Retrieved from "https://muppet.fandom.com/wiki/Thelma_Thumb?oldid=1191676"
Community content is available under CC-BY-SA unless otherwise noted.