Thick Wilson was heard in The Dark Crystal as the voice of SkekAyuk, the Skeksis gourmand. He also appeared, unbilled, in The Great Muppet Caper, in the non-speaking role of a produce stall vendor in "Hey a Movie!" (surrounded by Singing Food and later trying to catch the free-roaming chickens).

A portly, florid-faced character actor, Wilson performed extensively in both England and Canada, and appeared in such films as The Dirty Dozen (as Captain Haskell), The Mirror Crack'd (as the mayor of St. Mary Meade), and Strange Brew, the cinematic debut for the Dave Thomas and Rick Moranis duo Bob and Doug McKenzie.

As a voice actor, in addition to Dark Crystal, Wilson was heard in a dubbed Japanese animated version of The Wizard of Oz (as the Cowardly Lion), ALF and ALF Tales (as the title character's dad Bob Shumway and villainous Larson Petty), and the animated feature The Thief and the Cobbler (with the voices of Jonathan Winters and Vincent Price). 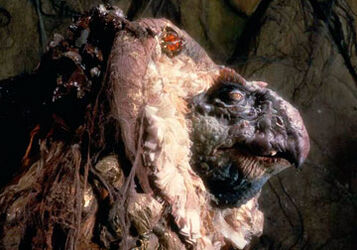 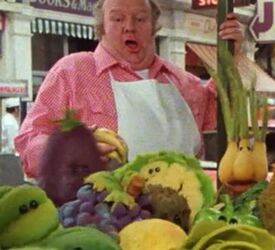 Retrieved from "https://muppet.fandom.com/wiki/Thick_Wilson?oldid=1079066"
Community content is available under CC-BY-SA unless otherwise noted.