Tickle Me Elmo is a plush Elmo doll that giggles and says "That tickles!" or "Oh boy!" or the two together when his belly is squeezed once. Two tickles makes him laugh a bit harder and say one of the two phrases. Three squeezes in a row sends him into a laughing, shaking frenzy, and he will repeat this action three times if his belly is squeezed within 5 seconds, otherwise he will reset himself to 1-2-3. Produced by Tyco in 1996, Tickle Me Elmo became that year's hottest toy -- and the hardest to find toy since the Cabbage Patch Kids craze in 1983.

In July 1996, the Tyco marketing team sent a Tickle Me Elmo doll to daytime talk show host Rosie O'Donnell for her one-year-old son, and another 200 dolls to the show's producer. In one Rosie episode in October, O'Donnell used the toys in a stunt based on Groucho Marx's You Bet Your Life program -- whenever a guest said the word "wall", she threw a doll out into the audience. Sesame Workshop says that O'Donnell's show "had an early hand in launching the Tickle Me Elmo sensation."[1] One source claims that sales of the toy jumped after the promotion on Rosie, and jumped again in November when Bryant Gumbel held a Tickle Me Elmo toy throughout most of a Today Show episode.[2]

On Black Friday, the day after Thanksgiving and the "official" start of the Christmas shopping season, Tickle Me Elmo sold out of stores around the country within two hours.[3] Tyco, which had originally expected to sell 400,000 Tickle Me Elmos, couldn't keep up with the demand, even though they continued to ship new product from their factories in Asia throughout the Christmas season.[4] The company reportedly sold over a million Tickle Me Elmo dolls by Christmas, and over 5 million between 1996 and 1997.[5]

News reports of trampled store clerks[6] and fights erupting over the last doll in the store[7] were not uncommon. Disappointed shoppers became even more disgruntled when The New York Daily News reported that John Gotti, Jr., son of the reputed mob boss, had purchased a case of Tickle Me Elmos at a Toys "R" Us store in Queens, New York, weeks after the store had sold out of them[8]; corporate officials stated that Gotti "was just fortunate to be in the right place at the right time" and was afforded no special treatment.[9]

A black market quickly sprang up in classified ads and on the internet, and there were reports of parents spending hundreds of dollars on the toy, which originally retailed at $29.99.[10] Cartier even put a Tickle Me Elmo, draped with a diamond necklace and bracelet worth $1 million, in the window of their flagship store on Fifth Avenue in New York City; the doll was offered as a free gift with the purchase of the necklace and bracelet.[11]

Although Elmo had been gaining prominence and popularity on Sesame Street since Kevin Clash took over the character in 1984, it was the publicity from the Tickle Me Elmo craze that gave the character his biggest exposure and helped him skyrocket to even greater fame.

The toy was invented by Ron Dubren, who came up with it seeing two kids tickling each other helplessly. He thought of how he could translate the silliness into a toy, and he and his assistant created Tickles the Chimp from a toy monkey, which did nothing but laugh. Twelve companies turned it down until Tyco realized its advantage and tested the toy in front of adults. The reaction showed that they would have to make the toy somewhat better, and they took a motor now used today to make cell phones vibrate and created Tickle Me Elmo.[12]

A new Elmo doll has been released every year following release of Tickle Me Elmo, including Let's Pretend Elmo and Chicken Dance Elmo, but none of these toys have achieved the success or popularity of the original. Three of these variations have included "tickle" features.

Toss and Tickle Me Elmo

Toss and Tickle Me Elmo was released in 1998. As the name suggests, he laughs and shakes when his belly is squeezed, just like the original Tickle Me Elmo, and when tossed. Tossing Elmo just needs to gently throw him up in the air not too high and will respond to it. He also has a feature that makes him say "Bouncy bouncy" when he is bounced on his bottom gently. The bounce and toss steps are randomly chosen in the voice box, so it doesn't do it sequentially. If there's no input when Elmo asks for a certain action, he will ask to be played with for a few minutes, otherwise he will shut himself off after that time. This one now has a tilt sensor that senses being tossed or bounced.

Tickle Me Elmo Surprise, also known as the "Surprise Edition" of Tickle Me Elmo, was released in the fall of 2001. This Elmo has five ticklish spots, sensors are located in both feet, under both arms, and his tummy, but he only goes into his trademark laughing fit when the right spot is tickled, but every time a tickle spot is squeezed, the "most ticklish spot" changes its location. He would tell the player that he's "not ticklish there" or "ticklish there", and when the right spot was found, he would shake and say "Ha ha ha.. that tickles Elmo the most.. ha ha ha" A contest was held in conjunction with the release of the doll, in which five of the "Surprise Edition" Elmos would stop laughing on January 9, 2002 and announce to the people squeezing them that they had won a prize. The grand prize was $200,000 check, a 2002 Volkswagen New Beetle, a Power Wheels VW Beetle, a computer and $60,000 in cash. The grand prize announcement was a "Congratulations!" message, and only one doll was programmed with that message. The first prize (4 winners), was announced by a "You found it!" message, and had everything from the grand prize except for the $200,000 check, and the cash win was $40,000. The game began on August 1, 2001, and ended on June 30, 2002. All five winning dolls became property of Mattel after they win.

T.M.X., which stands for Tickle Me Extreme or Tickle Me 10 (in honor of the tenth anniversary of Tickle Me Elmo), was released on September 19, 2006. T.M.X. Elmo has three ticklish spots, on his chin, belly, and foot. He comes in a box that says either "Warning" or "Top Secret". When the lid is lifted, Elmo giggles and says phrases like "Uh, uh, uh! No peeking!" and "Elmo feels really ticklish in here!" When Elmo is tickled once, he laughs, talks and slaps his leg, then sits down and rocks himself back up, then asks for the player to do it again. When tickled twice, he slaps his leg, sits, then he falls backwards and kicks his legs, laughing even harder, and says "Give Elmo a break, please!" at the end. And when tickled a third time, he does everything from the first and second tickles, but adds him rolling over onto his stomach, pounding the floor with his fists (still laughing), and then stands back up again with a sigh.[13] This version, however, has no automatic shut off, and has tilt sensors to know what position he is in so he can get back up after an action.

TMX won "Toy of the Year" from the Toy Industry Association's annual Toy of the Year Awards; it also won the "Infant/Preschool Toy of the Year".[14] It was available in both English and Spanish-language editions. The toys sold for as much as $400 on eBay, around 8 times the SRP.[15] 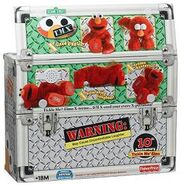 Two different Barbie dolls were released to coincide with the premiere of the T.M.X. Elmo doll. Each Barbie is wearing an Elmo shirt, she is carrying a bag with an image of Elmo's face on it, and she comes with a small Elmo doll that giggles when you squeeze his tummy. The tiny Elmo comes in a small replica of the "top secret" T.M.X. box.

Released in 2007, the T.M.X. eXtra Special Edition Elmo doll laughs, rolls, sings and hiccups when tickled. He has a variety of responses to very specific sequences of posing him and tickling him, such as raising his arm and tickling his tummy to make him sing. A "clue" is provided for each of these tricks; the first clue comes with the doll. A new rhyming clue was revealed each week on the Fisher-Price website during 2007; all clues will be available starting January 2, 2008.

Toss and Tickle Me Elmo 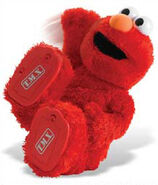 Both available Barbie dolls with their T.M.X. Elmo

In 2017, 21 years after the original Tickle Me Elmo's release, Hasbro's annual press kit of Sesame Street toys announced a new version that was released in Fall 2017, meant to be softer with more activation points, and less batteries.[16][17] The new toy was produced under the Playskool label. 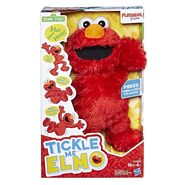 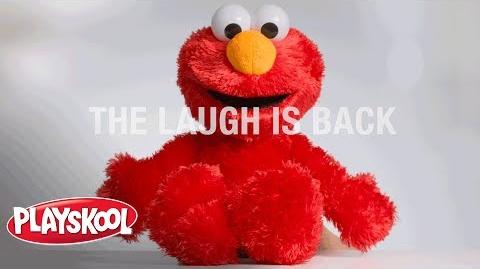 Other "Tickle Me" characters

The "Tickle Me X-treme" platform expanded with new versions of the Tickle Me Ernie and Cookie Monster dolls which were released for the 2007 holiday season. 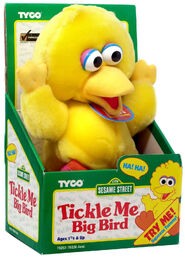 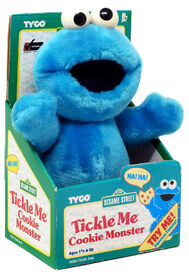 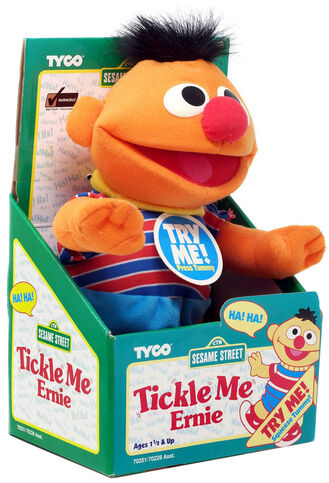 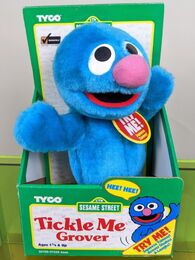 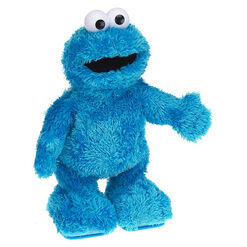 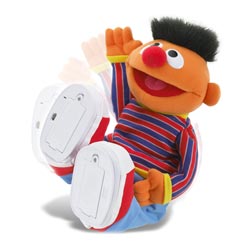 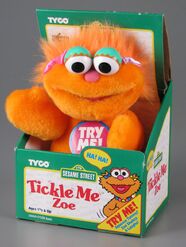 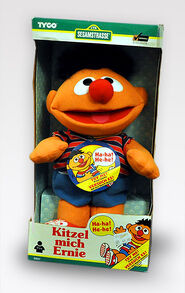 Kitzel mich Ernie, made for the German market in 1997 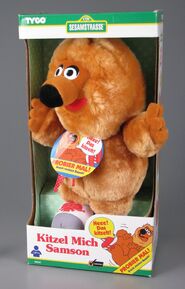 In 2012, Hasbro released a new version called LOL Elmo. This toy upped the stakes -- not just laughing and shaking, but also telling jokes and rocking back and forth.

In 1997, Western Publishing and Random House published books that featured a tickle theme.