Time is a weekly news magazine which has been published since 1923. Covering events in American politics, world news, and entertainment, the Muppets have been featured in several articles over the years. During the run of The Muppet Show, the magazine's "People" section often had brief blurbs on the show's guest stars and their relationship with the Muppets, and resident critic Richard Corliss reviewed most of the films, including a comment that The Dark Crystal was Jim Henson's bleak "foray into the art, dammit, of puppetry." 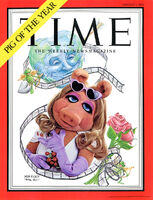 Piggy parodies the cover of Time 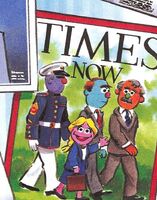 Betty Lou imagines herself on the cover of "Times Now"

Constantine with his altered Time cover

Wikipedia has an article related to:
Time (magazine)
Community content is available under CC-BY-SA unless otherwise noted.
Advertisement