Tingo is the main character of Sesame English. Though technically a monster, Tingo resembles a tiger and describes himself as "an international cat." Tingo is multilingual, fluent in 4,000 languages including Spanish, Hmong, Korean, Mandarin Chinese, Vietnamese, and his native "Tingo-ese." Tingo is an exchange student living with his American friend Niki. He's athletic, musical, and hungry, amongst other traits. He also has a pet elephant, Dinky, who he brings with him to America.

Although Tingo's dialogue is recorded in English, 20 to 30 percent of his speech is later translated into the language of the target country, addressing the audience to help bridge the language gap. 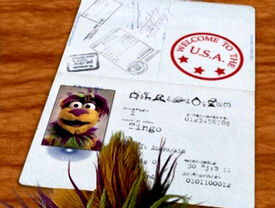 Tingo's passport seen in the opening sequence
Add a photo to this gallery
Retrieved from "https://muppet.fandom.com/wiki/Tingo?oldid=1101943"
Community content is available under CC-BY-SA unless otherwise noted.