Tony is a green Anything Muppet who often appears in the company of large, furry monsters (whether he wants to be or not). He participated in several Sesame Street sketches and featured by name in the 1973 character style guide. His name is also mentioned by Gordon in Episode 0080 and in segment scripts featuring the character.[1]

He debuted in "Lulu's Back in Town" with Lulu (played by Beautiful Day Monster) (First: Episode 0030). The duo also appeared that same season in a cover of "Windy." (First: Episode 0074) Tony continued to appear in new sketches from time to time through Season 10.

The puppet was slightly adjusted after Season 1; his pink nose was replaced with a light blue one and he was applied a pair of eyebrows.

The same puppet used for Tony was also seen in a sketch as the clerk in a clothing store (performed instead by Jerry Nelson) assisting a woman looking for a blue, furry coat (who ends up buying Cookie Monster when Tony doesn't have anything in stock to match her tastes). (First: Episode 0145) 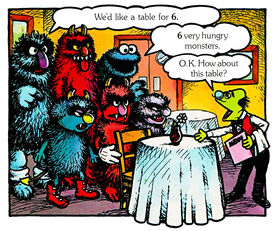 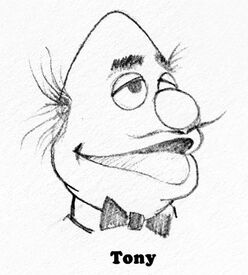