Tony Sirico (b. 1942) is an American actor best known for his role as Paulie Walnuts in the television series The Sopranos.

Sirico, along with Sopranos co-star Steve Schirripa, appeared in Elmo's Christmas Countdown in which he attempted to portray Bert alongside Schirripa's Ernie in "The Bert and Ernie Christmas Special." The pair returned in the television special A Muppets Christmas: Letters to Santa. 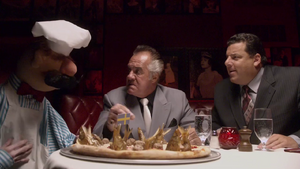 Sirico with the Swedish Chef and Steve Schirripa on
A Muppets Christmas: Letters to Santa
Add a photo to this gallery

Wikipedia has an article related to:
Tony Sirico
Retrieved from "https://muppet.fandom.com/wiki/Tony_Sirico?oldid=1079242"
Community content is available under CC-BY-SA unless otherwise noted.