Tosh Fraggle is a pink Fraggle with green hair. She has a pet beast named Beastie and is good friends with Boober.

Though her first appearance as an unnamed Fraggle was in "Red's Club", her name was not revealed until the second season episode "Boober's Quiet Day."

She also appears in the background in various episodes, such as "Manny's Land of Carpets" and "The Honk of Honks." 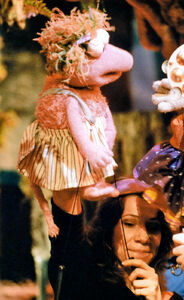