A Muppet Toucan was seen on Sesame Street as early as Episode 0831. He introduces himself as Juan Toucan (Richard Hunt) who has flown up to Sesame Street in the winter to experience another climate.

In Episode 1576, he appears as a resident of the Windy Hill bird sanctuary. Here, the puppet is performed by Brian Muehl.

By the early 1990s, the puppet was refurbished with Muppet eyes and a tongue, as seen in "We Are All Earthlings" (both the original version and the remake). He's later seen in the song "Let's Lay an Egg" sitting with a parrot and singing about her egg-laying abilities.

He went on to appear in other segments including a scene in Elmo Saves Christmas, features in "It's a Habitat" and "This is My Home" from Episode 4187, and the recording session video for "Try a Little Kindness". 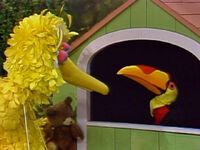 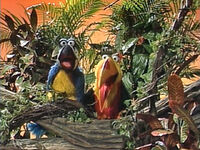 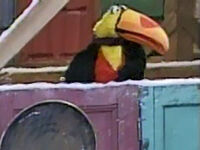 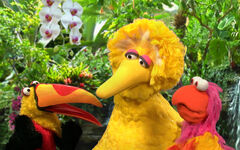 Episode 4187
Add a photo to this gallery
Retrieved from "https://muppet.fandom.com/wiki/Toucan?oldid=1270862"
Community content is available under CC-BY-SA unless otherwise noted.