Trafalgar Square is a square in Central London, England. It is named to commemorate the Battle of Trafalgar (the British naval victory over Napoleon) and was publicly opened in 1844.

Notable landmarks include Nelson's Column, which stands in the center of the square. The column is topped by the statue of Admiral Horatio Nelson, hero of the Battle of Trafalgar, and reaches a total of 169 feet. Lion sculptures adorn the base. The square features other statues and monuments as well as the many fountains which decorate the area. 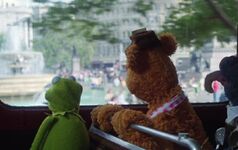 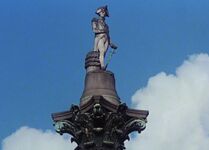 The statue of Nelson at the top of Nelson's Column, as shown in The Great Muppet Caper
Add a photo to this gallery
Wikipedia has an article related to:
Trafalgar Square
Retrieved from "https://muppet.fandom.com/wiki/Trafalgar_Square?oldid=1288290"
Community content is available under CC-BY-SA unless otherwise noted.