The Tribeca Film Festival played host to the world premiere of The Muppets' Wizard of Oz on April 27, 2005. The film was screened at the Tribeca Performing Arts Center, above which floated the Kermit the Frog balloon frequently seen in the Macy's Thanksgiving Day Parade.

The film, which was the shorter cut shown on ABC (as opposed to the longer DVD version), was introduced by Robert De Niro and Kermit the Frog.

Kermit and a newly brunette Miss Piggy, Gonzo, Fozzie and Pepe appeared together on the red carpet.

Muppeteers and Henson employees in attendance included Steve Whitmire, Eric Jacobson, Bill Barretta, Kirk Thatcher, and Martin Baker. The premiere was followed by an after-party for the cast and crew. 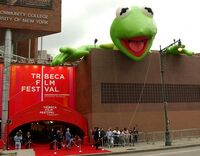 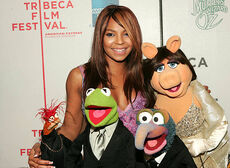 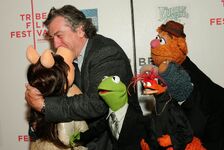 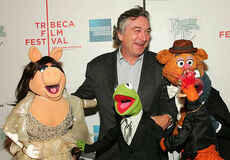 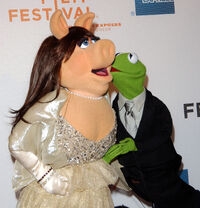 Add a photo to this gallery
Retrieved from "https://muppet.fandom.com/wiki/Tribeca_Film_Festival?oldid=1200258"
Community content is available under CC-BY-SA unless otherwise noted.