In the video, Elmo and Abby go trick-or-treating at Count von Count's castle. There, they count decorations and dance "The Batty Bat," while also trying to catch a runaway pumpkin, who has stolen Elmo's hat.

Bonus features include a full episode, "The Sesame Dress-Up Club," and a digital storybook, Which Witch Is Which?

The new footage for the DVD was written by Molly Boylan and directed by Ken Diego. 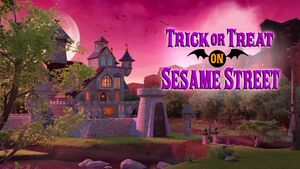 Title card
Add a photo to this gallery

Retrieved from "https://muppet.fandom.com/wiki/Trick_or_Treat_on_Sesame_Street?oldid=1102113"
Community content is available under CC-BY-SA unless otherwise noted.