"Trip to New Mexico" is a Sesame Street story arc that took place over several episodes in Season 7 (1975).

The five-part narrative marks the first time the show would film on location for a multi-episode theme, a feat lauded by the press as a device that worked beautifully.[1] The production traveled to New Mexico's Rio Grande Valley in the spring of 1975[2] to film with the Roma household, a real-life Chicano family native to the area. Jon Stone noted, "By presenting children in the settings where they live, we add realism and dramatic impact to our goal of teaching about different culture."[1]

On-screen, the story involves Luis visiting his home town to help his grandparents build a new house. He invites his Sesame Street neighbors to come along including Big Bird, Oscar the Grouch, Maria, Gordon, Bob. While there, they also meet up with Buffy — who had just been introduced a few episodes prior — serving as a guide on a trip to a local native pueblo.

The episodes were featured in the February 1976 issue of Sesame Street Magazine presenting Big Bird on the cover, riding a horse. The magazine included an illustrated postcard sent from Big Bird (inspected by Sherlock Hemlock) in which he writes about befriending a roadrunner. It also includes a photo diary recapping some of the events from Big Bird's perspective. 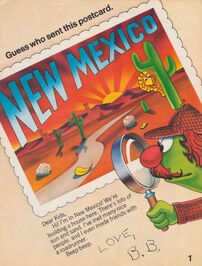 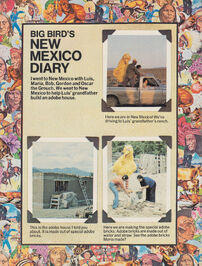 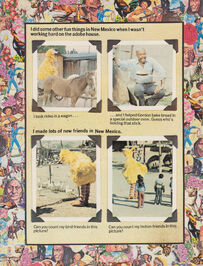 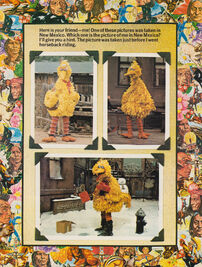