Troel was a poodle character on Sesamstraat, the Dutch co-production of Sesame Street.

Troel was a fluffy white girl poodle. She was very feminine and a little naïve, and she had a cute high voice. Her best friend was Tommie.

Troel was introduced during the second season in 1977 as the first girl Muppet to star with Tommie and Pino. She was designed to look like a girl version of Tommie.

Even though the viewers had no problems with her, the producers found her too feminine for a show that dealt with female emancipation, so she disappeared after a year.

Troel was replaced by Ieniemienie a couple of years later.

The Dutch word "troel" means "dear" or "sweetheart" in a more informal, sometimes even negative way. 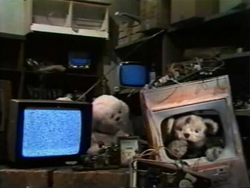 Add a photo to this gallery
Retrieved from "https://muppet.fandom.com/wiki/Troel?oldid=1102121"
Community content is available under CC-BY-SA unless otherwise noted.