Trudy Young is a Canadian actress who played Princess Melora in The Frog Prince, and also appeared as the attractive version of Liza in Jim Henson's experimental drama The Cube.

Young's other credits include regular roles on The David Steinberg Show and George, and hosting the children's series Alphabet Soup. She also had the distinction of participating in Pink Floyd's 1979 concept album The Wall, playing the spoken role of the groupie in the track "One of My Turns." 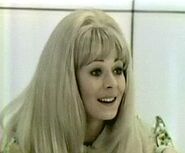 The Frog PrincePrincess Melora
Add a photo to this gallery

Retrieved from "https://muppet.fandom.com/wiki/Trudy_Young?oldid=1079286"
Community content is available under CC-BY-SA unless otherwise noted.