"Try, Try Again" is a Sesame Street country song with two unique variations used on the show. Both songs feature the same trio of cowboys, with Jerry Nelson as the lead and Richard Hunt and Bob Payne as a pair of cowpokes who become confused by the lyrics.

Both versions were covered by Bennie Jolink and Marcel de Groot in the Sesamstraat special, Sesamstraat in Paradiso. 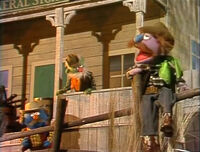 "Here" and "there" variation
Add a photo to this gallery

Retrieved from "https://muppet.fandom.com/wiki/Try,_Try_Again_(Romano)?oldid=1133356"
Community content is available under CC-BY-SA unless otherwise noted.