A Muppet turkey has made various appearances on Sesame Street dating to the early 1990s.

The turkey appeared as one of the harmonious farm animals who back-up Bruce Stringbean on "Barn in the USA." Performed here by Noel MacNeal, the bird demonstrates his ability to gobble for his sung line.

Over the years, the turkey's many background appearances have included "Don't Forget to Watch the Movie" and Elmo's World: Birds. In the latter, he appeared amongst a myriad of other birds with Mr. Noodle's brother Mr. Noodle. The puppet was also used for Turkey Lurkey (opposite Chicken Licken) in Episode 3322.

The turkey was also seen in a November 2005 appearance by the Sesame Street Muppets on Emeril Live. The bird served as the hot-tempered head chef of the kitchen, scaring Grover and the other lounging cooks into returning to their duties.

On the morning of the 2013 Macy's Thanksgiving Day Parade (November 28), the turkey (performed by Joey Mazzarino) took to Vine to advise viewers to "rethink their holiday meals," before panning the camera to Big Bird on the Sesame Street float.

In the 2018 video "Do the Turkey Gobble Wobble," the turkey (Matt Vogel) plays banjo and sings with Elmo and Abby Cadabby about being thankful on Thanksgiving. 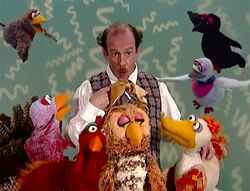 The turkey appears alongside other birds in Elmo's World. 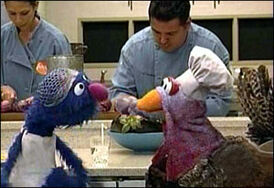 Emeril Live
Add a photo to this gallery