Jim Henson's Turkey Hollow is a Thanksgiving made-for-television movie based on the original treatment for The Musical Monsters of Turkey Hollow that was developed by Jim Henson and Jerry Juhl in the 1960s. The story was adapted and directed by Kirk Thatcher. The movie aired in the United States on the Lifetime network on Saturday, November 21, 2015 at 8:00pm (7:00pm central). The movie aired on Lifetime UK in the United Kingdom on Thursday, December 24, 2015 at 10:00pm.

The movie was released on DVD and digital by Lionsgate Home Entertainment on November 24, 2015.

While the original project was not completed by Jim Henson, in 2011, Lisa Henson first mentioned during a Henson.com podcast interview that the project was one of many being looked at for revival.[1] In 2014, Roger Langridge adapted the original teleplay into a graphic novel.

The movie follows the story of the Emmerson family, recently divorced father Ron (Jay Harrington) and his kids Tim (Graham Verchere) and Annie (Genevieve Buechner), as they head to the quaint town of Turkey Hollow to spend a rustic Thanksgiving at the farm of Ron’s eccentric Aunt Cly (Mary Steenburgen). Surprised by the lack of internet and technology in Turkey Hollow, Tim and Annie soon find themselves swept up in tracking the “Howling Hoodoo,” an elusive monster that, up until now, Turkey Hollow residents have long dismissed as mere legend. The Thanksgiving holiday threatens to take a bleak turn when a scheming neighbor frames Aunt Cly for turkey theft, but the fractured family teams up with some surprising new friends to save the day.[2] 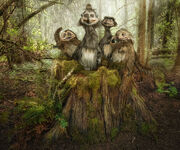 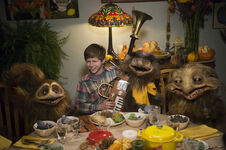 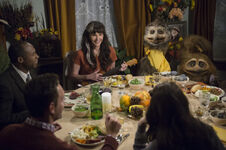 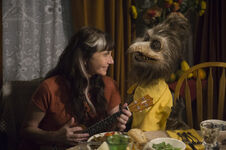 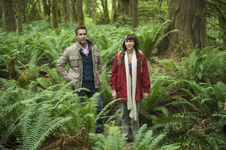 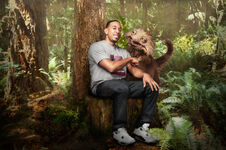 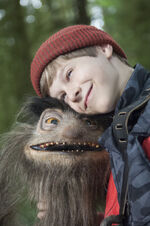 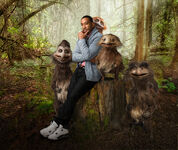 In 2014, USA Today revealed The Musical Monsters of Turkey Hollow script was headed to television. Lisa Henson stated the adaptation is “incredibly close to the original treatment.”

Henson's original puppets along with updated puppet designs for the upcoming special were shown by puppet builder Robert Bennett in a Google+ Hangout tour of Jim Henson's Creature Shop in August 2014.[3]

Principal photography was set to begin in the spring of 2015 in Nova Scotia, Canada. However, because of a new tax credit,[4] production on the special moved to Front Street Pictures in Vancouver, where filming began on June 8.[5] The special wrapped on July 4 and aired on the Lifetime network in November.[6]