The "Steppin' Out" Gonzo action figure from Palisades Toys was available exclusively through the Palisades Collector's Club and Wizard World East. Similar to the purple tux Gonzo Action Figure, the entire figure is a new sculpt of the character.

In place of Camilla, this Gonzo is accompanied by Bernice, a previously unseen chicken companion of Gonzo's. Bernice has pink eyelids and smaller pupils.

The tire Gonzo eats to the tune of "Flight of the Bumblebee" in The Muppet Show episode 101 is included, as well as a record album titled "My Feathered Valentine" containing the following songs: 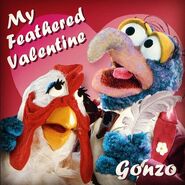 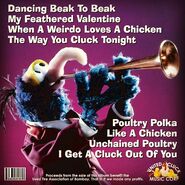 Add a photo to this gallery
Retrieved from "https://muppet.fandom.com/wiki/Tuxedo_Gonzo_Action_Figure?oldid=1102195"
Community content is available under CC-BY-SA unless otherwise noted.