Twiddlebugs at Work is a Sesame Street storybook about the everyday lives of Twiddlebugs.

According to the welcome sign in Ernie's window box, the population of Twiddlebug Town is 427. Twiddlebugs live in houses made of lightbulbs, playing cards and pencils, old milk cartons, old coffee cups, thread spools, funnels and ice cream cones.

The book illustrates the daily lives of the Twiddlebugs, who live much like humans, but on a decidedly smaller scale: 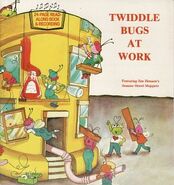 Retrieved from "https://muppet.fandom.com/wiki/Twiddlebugs_at_Work?oldid=1136398"
Community content is available under CC-BY-SA unless otherwise noted.