Twinkles is a cat, who was owned by Tex Richman. Richman had the cat gold-plated for preservation, which either followed his death or was in fact the cause. Of the things he regrets as a man of wealth, this act stands out in particular as expressed in a deleted portion from the song "Let's Talk About Me" in The Muppets film. If he could start it all over, he wouldn't gold plate little Twinkles again.

In the final film, Twinkles also appears very briefly in a photo with Tex, glimpsed on a shelf in the scene when the plutocrat reads The Economist. 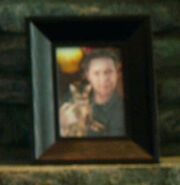 Tex and Twinkles in happier days, on display in Richman's office
Add a photo to this gallery
Retrieved from "https://muppet.fandom.com/wiki/Twinkles?oldid=1102223"
Community content is available under CC-BY-SA unless otherwise noted.