UNO is a card game using a specially printed deck. The game was invented by Merle Robbins in 1971, and is now owned by Mattel.

The custom deck consists of 108 cards, mostly split into 4 colors: red, green, blue and yellow. The remaining cards have special roles in the game: "skip", "draw two", "reverse" and "wild" cards. To start the game, seven cards are dealt to each player, and the top card of the stock is exposed to start the discard pile. At each turn, a player may play a card from their hand that matches the suit or rank of the top exposed card, or play a wild or wild draw four. If a player has no legal card to play, that player draws the top card of the stock, and may either play it or place it in their hand. The hand ends when a player plays all their cards. When a player plays down to only one card, that player is required to say "uno". After a player plays all of their cards, the other players count the number of points pertaining to the number of cards in their hands. When the number for one of the players reaches or exceeds a certain value (500 is customary), the player with the fewest points wins.

Sababa Toys has produced several Muppet-related versions of the game. 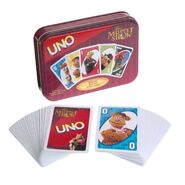 "My First UNO" cards with Sesame Street characters holding up numbers on the number cards.
Add a photo to this gallery

Retrieved from "https://muppet.fandom.com/wiki/UNO?oldid=1079307"
Community content is available under CC-BY-SA unless otherwise noted.