Produced by the USO, the show started in the United States in 2008. Since then it has had performances across the United States (including Alaska and Hawaii) as well as bases around the world. The Sesame Street Experience for Military Families is the first-ever traveling USO tour designed specifically for military families, and has become the longest-running tour in USO history.[1]

Children and parents receive support material (including the DVD) and a stuffed toy[2] or "swinging Elmo light"[3] after the production. In some locations, over 1,000 people have attended each show.[4]

The tour was launched by First Lady Michelle Obama and Dr. Jill Biden in Columbus, Ohio, as the duo wrapped their national Joining Forces tour to support America's military families.

This was initially dubbed the Fifth Phase, but retroactively has been rebranded as the Sixth Phase by the USO FAQ.[6] 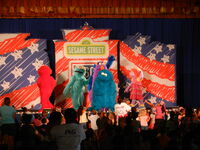 The Sesame characters say goodbye to their friends living at Aliamanu Military Reservation in Hawaii. 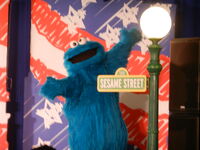 Cookie Monster brings the Street to military families in Hawaii.
Add a photo to this gallery

Retrieved from "https://muppet.fandom.com/wiki/USO_Experience_for_Military_Families?oldid=1187572"
Community content is available under CC-BY-SA unless otherwise noted.