Uncle Deadly is a blue, reptilian-looking creature, also known as "the Phantom of the Muppet Show". Deadly made occasional appearances on The Muppet Show, and faded from prominence when the show ended. In 2011, Deadly returned in a pivotal role in The Muppets, as Tex Richman's henchman, and later became a prominent character on the ABC series The Muppets.

Although he made his first appearance alongside Vincent Price on episode 119 of The Muppet Show, Uncle Deadly did not receive his proper introduction until episode 121. One by one, the Muppets tell Kermit that they have seen a phantom, but Kermit refuses to believe them until he sees Uncle Deadly with his own eyes. Once revealed, Uncle Deadly explains that he used to perform at The Muppet Theatre, where he once played his most difficult role, Othello. On opening night he was killed... by the critics.

Uncle Deadly sang a handful of songs on the show, including "Sheik of Araby" and a bar of "You're Just in Love" with Ethel Merman. He was featured in the Muppet Melodrama sketches with Miss Piggy and Wayne in the third season, of which only two were made. Although he didn't have a major role in most of the Muppet movies, Uncle Deadly did appear in the final group scenes at the end of The Muppet Movie and The Muppets Take Manhattan. He also appeared on The Tonight Show in 1979 when Kermit the Frog hosted, where he was reunited with Vincent Price.

In the December 2000 issue of the Writers' Guild magazine Written By, which featured interviews with Muppet writers Jim Lewis, Kirk Thatcher and John Derevlany, it was mentioned that one of the projects Thatcher had in development was a silly Goosebumps-type TV show called "Uncle Deadly's House of Badness." The project never got off the ground, and it's unknown if a pilot was filmed or if a script was even completed.

According to Jerry Nelson, Uncle Deadly was his tribute to actor John Carradine,[1] whose sometimes hammy performances were a staple of horror films.

After over twenty years of absence, Uncle Deadly returned in the film, The Muppets, as the "sinister second-in-command" to Tex Richman. In a press junket interview, Uncle Deadly explained that in his spare time, he had been haunting Stage 28 (one of the filming locations for the movie), switching every other day with The Phantom of the Opera. They both took the weekends off, to which Deadly added "Even a phantom must rest." (YouTube) He and Bobo also cameo together during the wedding scene and during the ending song in Muppets Most Wanted.

In the ABC series, The Muppets, Uncle Deadly works in wardrobe for Up Late with Miss Piggy, taking great care to ensure Miss Piggy never knows her dress size, and often panics over loose threads or lint on anyone. He has retained an interest in fashion in post-series appearances, including his Twitter feed, @unclebydeadly. Uncle Deadly also continues to be Miss Piggy's assistant as shown in The Muppets Take the Bowl and Muppets Now.

From 2017 to 2018, Uncle Deadly hosted the Muppet Thought of the Week videos on the Muppets YouTube Channel, and made featured appearances in ten of the entries.

He appears in Muppets Haunted Mansion as a ghost who tries to officiate the wedding between Pepe the King Prawn and Constance Hatchaway. 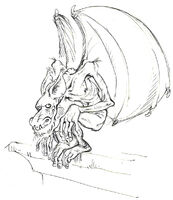 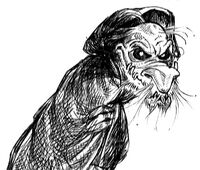 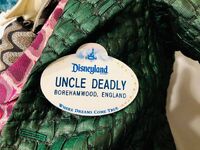