Accessories: Muppet Ghost and clear base, Muppet Skull, display base

As an action figure, Uncle Deadly appears in three variations: a standard version; a grayscale, glow-in-the-dark version; and a Steppin' Out version. Each comes with differently painted Muppet Ghost and Muppet Skull pack-in figures.

The clear display base has an included rod that sticks into it and the ghost making it appear to be floating.

Besides a brief scene in episode 304 of The Muppet Show, Uncle Deadly never had legs. In this scene, the camera simply cuts to a closeup of a pair of black shoes and trousers. The design of Uncle Deadly's legs and feet comes from a comic strip in The Muppet Show Annual 1979. This is also the only source that reveals his tail. 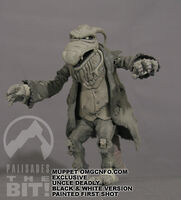 Black and white repaint
(unproduced)
Add a photo to this gallery

Retrieved from "https://muppet.fandom.com/wiki/Uncle_Deadly_Action_Figure?oldid=450028"
Community content is available under CC-BY-SA unless otherwise noted.