Uncle Sam is the fictional embodiment of the United States of America, heavily used in political cartoons, propaganda, and other anthropomorphic depictions of the country. The term "Uncle Sam" dates to the War of 1812, and the earliest depiction to 1852. It was primarily in the post-Civil War era, however, particularly in the illustrations of Thomas Nast, that the familiar image of the tall, goateed Uncle Sam (borrowing aspects of Abraham Lincoln) completely supplanted earlier anthropomorphizations of America (such as Columbia and Brother Jonathan).

Uncle Sam became particularly iconic in World War I, through a series of famous recruitment posters in which, finger outstretched, he encouraged citizens to join the military.

Sam the Eagle, from The Muppet Show Fan Club Newsletter 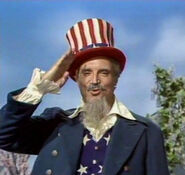 Baby Rowlf, from the Muppet Babies episode "What Do You Want to Be When You Grow Up?"

Sam the Eagle, from Muppet*Vision 3D

Animal, on the Great Muppets in American History coloring book

Sam in the Great Muppets in American History coloring book 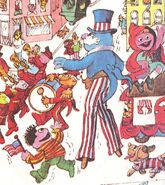 Uncle Sam in a parade in Big Bird's Red Book 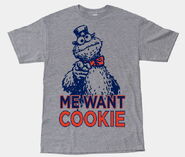 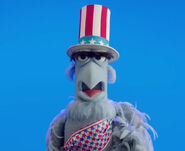 Sam Eagle in a 2014 Presidents Day video posted on Walt Disney Studios's Facebook page. [1]
Add a photo to this gallery
Wikipedia has an article related to:
Uncle Sam
Retrieved from "https://muppet.fandom.com/wiki/Uncle_Sam?oldid=1262205"
Community content is available under CC-BY-SA unless otherwise noted.