Unisaurs are the innumerable supporting characters on Dinosaurs. Rather like the Anything Muppets and Whatnots, the Unisaurs are recycled, with variations in costume and occasional cosmetic alteration, for the many guest characters, background extras, and minor recurring characters. These characters can be divided between full body puppets, of which there were only five or six, and hand puppets, of which there were a dozen or more. Unisaurs were created and used to ease the production staffs need to populate a world of dinosaurs week after week. Changing costumes and occasionally features on an exisiting dinosaur was a lot faster (and cheaper) than creating individual and unique dinosaurs for every individual role. Without the Unisaur, Dinosaurs would not have been able to keep the world populated and the show going. 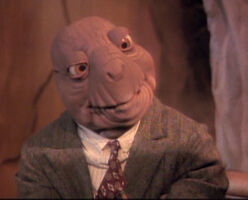 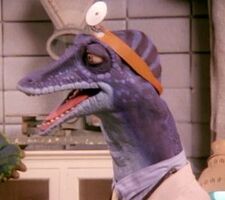 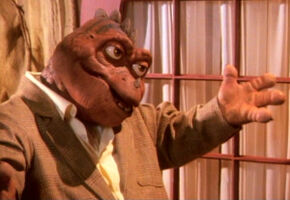 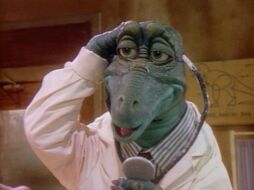 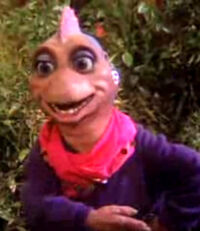 Female dinosaur
Add a photo to this gallery

The tall, needlenosed, deep blue dinosaur used most often as Mr. Pulman (the science teacher), Ralph Needlenose (another of Earl's Wesayso co-workers), and the Unisaur, outside of Mindy, most often used for female characters. This Unisaur was used for the doctor (201), Glenda Molehill, Hank the salesman (212, Heather, Dr. Herder, the inspector (412)

This Unisaur is, a bulky character with striped tail and back, and a prominent nose horn. It was first used, sans horn, for The Job Wizard. It also surfaced as the Grown Up Baby, Bob (DMV Worker), Gus Molehill, Al Harris, Lucius, Gus Spikeback (another one of Earl's co-workers), Richard (dinosaur), Andre, Dolf, Ray Gherkin, Frau Woodhouse and (sans horn) as Shelly.

This expressive, more lizard-like Unisaur was used most often as one of Earl's co-workers Ed (dinosaur). However, he also surfaced in the role of Mel Luster, Buddy Glimmer, Stu Boombird, Dr. Ficus, Ty Warner, The Babysitter, The Dinosaur Devil, Ansel and Walter Sternhagen. In the final season, this type was used for every character voiced by Thom Sharp, an assortment of clerks, flunkies, blue-collar types and assistants. With the exception of Decker, all of these characters also had the same two puppeteers, David Greenaway and Pons Maar).

This Unisaur, with detailed eyelashes, a smaller snout, a crest akin to hair, and lighter-hued skin, was used most often as Mindy, but also showed up as Caroline Foxworth, Sally, Trish and other specifically female characters. It had a fleshy pink with pastel stripes, the body type occasionally surfaced in a light green as well. Another female dinosaur, similar to this one but with speckled snout and other adornments, surfaced as Thighs of Thunder and Wendy Richfield.

The hand puppet dinosuar characters were used most often as television personalities, elders or officials, audience extras, and other characters who could legitimately be shown only from the waist up. There were at least a dozen or so of this type, in addition to unique characters such as Howard Handupme, but some of the more notable variations include the following:

A green dinosaur with a large muzzle.

Including: Mr. Lizard and others.

Including: Captain Heroic, assorted newscasters/reporters, and others.

Including: many child characters; most notably, Mr. Lizard's assistant Timmy. Two variations existed: a green one and a blue one.

the Richard Simmons Dinosaur (301), and others.

Similar to the male version, the female version had a slightly bigger muzzle and more feminine features.
Including: sitcom wife (302)

A slightly-cross-eyed dinosaur with a thin beak-like muzzle.
Used for Mr. Otto Lynch

Used during the final season.

Retrieved from "https://muppet.fandom.com/wiki/Unisaurs?oldid=1207552"
Community content is available under CC-BY-SA unless otherwise noted.