"Up, Up and Away" is a song that was a hit for the 1960s group The Fifth Dimension. It was performed on Sesame Street twice, first by Bob in Episode 0005, and later by Anything Muppets in a hot air balloon in Episode 0049.

Rowlf also performed a brief excerpt from the song in episode 209 of The Muppet Show. When it comes to the part when Rowlf sings, "Up, Up and Away," the candelabra that was sitting on his piano suddenly blast up into the air. 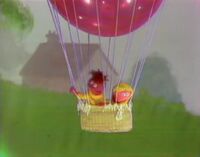 Anything Muppets version
Add a photo to this gallery
Retrieved from "https://muppet.fandom.com/wiki/Up,_Up_and_Away?oldid=1259527"
Community content is available under CC-BY-SA unless otherwise noted.