The urSkeks were noble beings shining with an inner light who entered the world through the Crystal. They attempted to use the light of the crystal to remove the evil from their souls and perfect themselves, but instead split themselves into two distinct races - the Mystics, the representation of the kindness and good in their hearts and the Skeksis, the representation of the wickedness and evil. Only if a Gelfling healed the Dark Crystal before the next Great Conjunction could the urSkeks be born again and the world of Thra be restored. After the Crystal was restored, they left Thra for an unknown location. 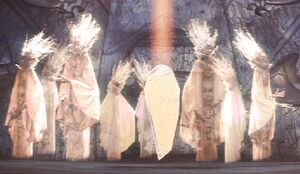 The urSkeks return to Thra

There were originally 18 urSkeks that were divided into Mystics and Skeksis. However, by the time they were rejoined, only 8 pairs were left. UngIm is the only urSkek to speak; he talks to Jen after the reunification of the crystal and before the urSkeks ascended from the planet.