Ursa is Bear's special friend from Spain. According to Bear in "You Go, Ojo!," Ursa lives in a house on a hill and tends to a farm, where she grows various berries.

She and Bear exchange mail regularly, and she has been mentioned in "Bear's Birthday Bash," "Picture This", You Go, Ojo! and "What's Mine Is Yours."

She made appearances in "Clear as a Bell", "And to All a Good Night" for a special party honoring Luna, and again in "You Never Know" as a surprise visit on Ojo's birthday. Physically, she looks exactly like Bear, except she wears a pink shawl with flower patterns on it, a flower behind her right ear and sometimes carries a pink hand fan.

The puppet used for Ursa was what was called behind the scenes "the PR Bear," used whenever Noel MacNeal was unable to perform Bear at public appearances. For her appearances, Ursa was voiced by Sesame Street puppeteer Carmen Osbahr but physically operated by Matt Vogel.[1]

Although purely acknowledged on the show as his "special friend," it was obvious from the show's subtext that Ursa was intended to be Bear's girlfriend.[1] 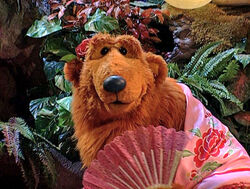