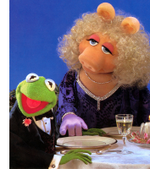 Muppet fan since birth in 1976. I grew up with The Muppet Show and then Fraggle Rock in the South West of England,UK. I seriously started collecting merchandise in 1990 although I had several items already growing up. I attended the UK premiere and after party of Muppet Treasure Island in 1996 where I met the key performers. I since met Kermit and Steve in 2006 at the London marathon and again in 2011 at The Muppets UK DVD release promo. In 2012 I tried having a go at making my own Fraggles and was amazed at the results making a generic Fraggle first, then Red and Gobo.

I have a great knowledge of muppet merchandise, so feel free to ask and I'll try to help. My favourite items in my collection are cast crew gifts, Henson company Christmas Cards, The full set of KilnCraft mugs, LP's and my large collection of signed items, many signed in person.

Retrieved from "https://muppet.fandom.com/wiki/User:Kermie1?oldid=736608"
Community content is available under CC-BY-SA unless otherwise noted.