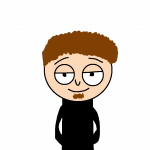 Hello there, my name's Alex, and if you're a fan of Sesame Street, you may recognize me from YouTube (formerly) as "wattamack4" (now known as "LittleJerryfan92").

Ever since I was a kid, I've been a huge fan of the Muppets. From watching shows like Sesame Street, The Muppet Show, and Fraggle Rock, I've been hooked. As previously mentioned, I have a YouTube account (formerly) under the same name (see above for name change), and I've posted many Sesame Street clips. Most of them are, unfortunately, from home media, (then-currently) modern-day episodes, and other online sources but I try my best to get clips users want uploaded. Although I don't have too many sources, in the past, I used have 3 recorded Sesame Street tapes; the first one from apx. 1993, which was a Sesame Street skits tape my Dad made when I was a baby, a recording from 1998 of episode 3752, which, due to a certain Sesame Street skit featuring Grover and Little Jerry and the Monotones as background characters, I felt I just had to have the episode on tape (but the episode alone I enjoyed none the less), and a 2nd sketch tape that I made in April of 2003 during elementary school when I was on vacation. In May of 2010, though, I later re-discovered my 2nd Sesame Street sketch tape.... only to discover it was taped over. I was disappointed, but hey, it happens.

I like to contribute as much as I can. From time to time, I may make a mistake, but I always learn from them.

And if you would like to check out the Sesame Street videos I uploaded, you can view them here.

I also draw occasional muppet drawings (most of them being on Apple paint. You may check them out here.

P.S. just for the record, I originally started off editing this site quite a while back before I joined this website. I am this anon user from a long time ago, and I apologise if I created any havoc back then.

Retrieved from "https://muppet.fandom.com/wiki/User:MackAttack92?oldid=1204389"
Community content is available under CC-BY-SA unless otherwise noted.