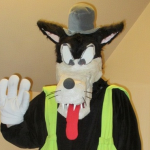 When I find something interesting or unusual in the Muppet or Sesame Street world, I always contribute it here immediately! Some of my more recent findings were that I was able to get more info on the long-lost Mysterious Theater skits! I also added the segment list for the Sesame Street Episode 4082. Another was the old rumor about Ernie's Death. More recent findings include discovering a Betty Lou walk-around costume and the Family Guy sequence with the Muppets having the wrong voices! I also added info about the early 1990s Gonzo walk-around suit, and also discovered the existance of a Sesame Street News Flash featuring the Boston Tea Party, as well as some pics for that series and for Monsterpiece Theater. Another page I created was one for Joe Marley from A Sesame Street Christmas Carol and Howie Eatswell (I didn't submit the pictures, though.) I am a member of the Muppet Central Forum, known as Muppet Dude (with a space between the two words).

Oh, and be sure to read my latest fan-fiction on Muppet Central Forum, "The Sesame Street Horror Special," aka "Herry Werewolf," now working on Part Four. It is a Mysterious Theater installment about Herry Monster getting a werewolf's curse and resembling The Big Bad Wolf!

Retrieved from "https://muppet.fandom.com/wiki/User:Wile_e2005?oldid=258002"
Community content is available under CC-BY-SA unless otherwise noted.