The Wonderful World of Puppets

Hi Emma! Do you have any screenshots on The Wonderful World of Puppets we could use on the article? Either the title screen or a shot of Louise Gold being interviewed in the program would do. Thanks! —Scott (contact) 21:51, February 18, 2011 (UTC)

Hi Scott, I'm afraid not. I have to documentary on a video-tape somewhere (not sure where). I don't have the technology or knowledge to do screen-grabs I'm afraid. Have you tried asking Warrick whether he might have it? Emma 22:31, February 19, 2011 (UTC)

Hello Emma. Of course, you are absolutely right! The production of 'Joseph....' was in 1976 I was getting confused with another show! Ahhh how the years take their toll! I have re-edited the page. Thank you. Best regards. Mark Jefferis.

There does not appear to be a number for the whole set given on the set. I have now uploaded my photographs as follows:

Hi, Emma! I have a question about a Louise Gold character, so obviously I come to you. :) It's about Meesey Mouse, from Mopatop's Shop. I thought that that was the name of Moosey Mouse's baby sister, but I came across an episode guide that says that there's an episode early in the second season in which Meesey Mouse comes in as a customer. I can't see Mopatop in the US, so I can't figure it out... Do you know anything about Meesey? -- Danny (talk) 15:33, 22 March 2009 (UTC)

Hi Danny, Actually I haven't looked into the Mopatop's Shop stuff in any detail. So I'm not too sure myself. Pretty much mostly everything I've read has also given Meesey Mouse as being Moosey Mouse's baby sister. I think Episode guides to occassionally get things wrong, unless they are done very throughly. It's so easy to mis-recall a character name. Or to say something that then gets misinterpreted. I would guess it's possible she might have come into the shop sort of as a customer in an episode. But I don't know enough about the character to know how likely that is. I think it might be worth trying to find out a bit more. I'll look into it. Emma 11:01, 28 March 2009 (UTC)

Okay, thanks! I'm pretty sure the episode guide is right about Meesey -- there's a second season episode that's called "Meesey Mouse", and the description was: "Moosey is smitten with a girl mouse named Meesey when she comes into the shop looking for a sound she has never heard before."
I'll see if I can find more about Mopatop... If you happen across anything, let me know! -- Danny (talk) 22:29, 28 March 2009 (UTC)

Right here we are, I asked a trusted source, NP, who says that Meesey "Far from being his sister I seem to remember a romantic interest for Moosey! I think they sang a song together.". So there you have it, the episode guide is indeed correct. Now that's something I didn't know myself (~;#% Emma 09:59, 29 March 2009 (UTC)

Hi, Emma. I know you're the resident Louise Gold expert here, so I was wondering if you had any insight into a question I had posted about Beakie elsewhere. It's generally accepted that Louise performed the puppet during the song "You and Me." But in the dialogue that follows, Beakie is voiced by Frank Oz. Do you happen to know whether Lousie would have performed the puppet to a vocal track by Oz for that bit? Or did Frank take over the puppeteering duties for Beakie when he was doing the voice? Thanks! -- Peter (talk) 17:55, 14 June 2008 (UTC)

Hi Peter, thanks for the message. I don't know for sure. I would sugguest that it might be worth somone tsking a close look at the footage and see if it is possible to deduce whether the puppet is being puppeteered right-handed or left-handed. Compare the footage in the song where we think it was puppeteered left-handed, with that for the dialogue. Are any arm-rods used, how is the puppet leaning etc. If it's puppeteered left-handed in the dialogue then Louise would have done it. But if it's puppeteered right-handed in the dialogue then Frank Oz would have done it. Hope that helps Emma 20:52, 14 June 2008 (UTC) 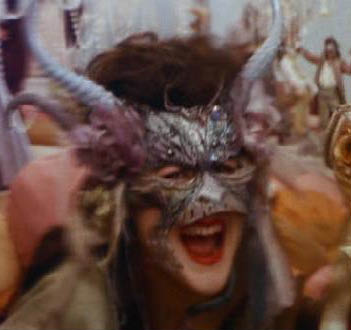 Oh my goodness! - Well I'm not totally sure. Please remember that even I haven't so far managed to actually spot Louise in the film. But I do think it's very very likely. The hair for a start IS that peculiar shade of red. And well the way her mouth is wide open. - Compare it with the picture from the inside front page of OM&M (the one of the entire cast and crew) - Look at Louise's mouth in that picture. Also the mask and the lighting is making it difficult to tell, but look at the shape of her eyes, slightly narrow? possibly brown? I have to say, I think it's pretty likely. (but I'm not 100% certain, perhaps 90%). You go find that OM&M picture, and I'll see what else I can find that might help. Emma 22:16, 22 May 2007 (UTC)
The more I look at it, the more I think it likely. Has anyone got any pictures from the bit in the film Billy The Kid And The Green Baize Vampire where the press reporter is dancing with the kid's agent. Louise (as the press reporter) in that scene I remember Louise is wearing a half mask then too, and I think it might help. Plus it was around the same time as Labyrinth Emma 22:22, 22 May 2007 (UTC)

Having checked and compared various pictures properly, I'm not so sure. I've had a look at the DVD too. My comments are as follows; This is a really tough one. As Aleal rightly points out, even I'm having difficulty with this. However, after reading this discussion I sat up late last night rewatching the relevant bits of the film, and the Making Of, on DVD. Firstly its quite hard to be certain from a still image (although they can be helpful in capturing something that's fast moving). Last night I did a few comparisions with some other pictures: (particularly the one in 'The Stage' for the 1994 production of Calamity Jane - which I don't have a computer copy of to hand, the 2002 Dress Circle Re-Opening pictures, see: http://www.salamanderphoto.com/decsite/events/specials/dresscircle/DressCircle_8880bweb.html and the Telegraph's review of Follies in 2002:http://www.telegraph.co.uk/arts/main.jhtml?xml=/arts/2002/08/08/btchas08.xml&sSheet=/arts/2002/08/08/ixartleft.html - not sure if that pics working ) - From the pictures alone I'd say it's pretty inconclusive, could go eitherway) I wasn't convinced it was her but I wasn't absolutely certain it wasn't either. So then I watched that bit of the film again. This is where it gets intersting. The shot someone's grabbed is around 104.24 - watching it on DVD I'm not sure the teeth are quite the same. And the movement just doesn't convince me as being totally characteristic. But I wouldn't have completely ruled it out (this is tough) However, I also spotted a women in a pink dress, also with chestnutty red hair, which I think is a more likely candidate. I wonder if someone can do a screen-grab of her so we can all have a look. This is around point 104:35 to 104:39 in the film. This woman appears to be to the left of Sarah, and leaning back slightly; she straightens up, moving to the right to pass behind Sarah (or maybe Sarah passes infront of her), closing her mouth as she does so. She has a wide smile and seems quite well built (slim but well built). It's that smile which makes me think that's more likely to be Louise. This woman in pink also appears at point 105:58 briefly moving a feather fan, and cuts across the screen left to right at point 103:38 holding a feather fan - which looks similar to the one that Louise IS holding in the Making-Of documentary. This woman is there again in the background of the ballroom at point 104:32. Hope my thoughts help. Emma 09:15, 23 May 2007 (UTC)

Danny, thanks for my Archive page. (My talk page was getting a bit long). I suppose I should have figured out what was wrong with the message. Emma 21:39, 30 March 2007 (UTC)