Once again, I have Sesame Street Magazine images in need of library sticker removal via Photoshop. Four this time --- they should all be in the recent history. Thanks in advance! George B. (talk) 04:21, 23 February 2007 (UTC)

Hey Scott; Nice cleanup on Bert! can you remove the digital date stamp on an image like this?? It's beyond my abilities.. or possibly beyond the Gimp. At anyrate I've never seen the dustjacket for this book before and it's such a generally high quality scan I'd like to add it if possible; if you can remove them there's also a picture of the back on ebay. -- Wendy (talk) 19:58, 25 February 2007 (UTC)

(Sung to the tune of "Dancing Queen.") I'm really glad we're tracking down any unsouced claims, whether it's one of those sort of "common knowledge" things that's either probably or definitely true but still needs a quote/citation, or things which were themselves taken from questionable secondary sources or anonymous contributors. I think it simultaneously improves our accuracy and, by encouraging the use of exact sourced quotes whenever possible on backstage issues, improves the readability of the pages. That's all, off to bed (and really need to schedule my Wiki time better for this weekend; three papers to revise, at least a first draft, by Tuesday). -- Andrew Leal (talk) 03:28, 23 February 2007 (UTC)

Yeah, I'm really glad we came up with that tag. There still may be ways we can improve it's usage though. A better policy page to link to might be a good start. And I'm also not crazy about the idea that things get tossed in that category and forgotten. Active Talk Pages is easy because it's linked to from the sidebar. We've got Attention there, too, but I think people might actually look at Attention if they were more compelled to go there: perhaps to get to Active Talk Pages because we moved it from the sidebar...? —Scott (talk) 03:31, 23 February 2007 (UTC)

I don't think removing Active Talk Pages would help necessarily. The problem with attention, or benefit, is that it's not a single category, but a page with links to seperate categories, all with seperate issues, so it's not as simple to get to unless you either a) are completely lost for something to work on and just poke around them all or b) are you, me, or Danny, who work on these things periodically to regularly, depending on our own schedules and Wiki priorities. I also think there tends to be a difference between "attention" tagged articles and cite issues. The former are either information which we know is out there and accessible, but the current regulars don't have (as opposed to specialized info) or just pages that need general re-qriting, expansion, proof-reading, etc. Cite issues are more varied. Some are easily remedied, some are dubious, others can be verified and are true, more or less, but someone needs to have access to the right book to source ir. As I've indicated, I'm pretty busy these days (or rather, I should be, curse the Wiki addiction), but I have No Strings Attached for a few days, which I know answers a couple of cite issues. -- Andrew Leal (talk) 03:41, 23 February 2007 (UTC)

That's the theory as I understand it. Although we're not always perfect about implementing it (it gets really hard to do on long tables and pages). -- Wendy (talk) 19:09, 22 February 2007 (UTC)

What Wendy said. Also, if Ernie has been linked in a paragraph at the top of a page, and then he's included in a list further down, I think it makes sense to link him in the list as well. —Scott (talk) 19:11, 22 February 2007 (UTC)

Thank you. I was on Episode 0020, and noticed that Ernie and Bert were both linked a couple of times, in fairly quick succession, and I thought I remembered something about linking once (though you're right, it makes sense if there's a list further down). Now I'll keep an eye out as I go through!-- Martha (talk) 19:15, 22 February 2007 (UTC)

It may be that the song was known as both titles at one point. I'd stick with the Archives title if for nothing else than to more easily disambiguate it from the character Alexander Beetle. We can always make a note of the alternate title on "Forgiven." —Scott (talk) 17:52, 22 February 2007 (UTC)

Yeah. That was sorta my feeling too. On the other hand, the only song left in the Archives listing for that episode is called "Muppet Punk", and the only un-identified song we have is "Frog Scout March"; was the march especially punk in style?? -- Wendy (talk) 18:50, 22 February 2007 (UTC)

Interesting. Muppet Punk sounds more like it would be the name for the brief guitar music the frogs play in Debbie's dressing room just before Kermit comes in to sing The Rainbow Connection. There's nothing punk at all about the military march they sing later. That music is your more typical "left! left! left, right, left!" shouting stuff you see in military training movies which is probably some traditional oration without a real music credit (other than perhaps "Traditional"). Any new lyrics would have been written by the writing staff, and probably omitted from the Archives list we have. —Scott (talk) 19:20, 22 February 2007 (UTC)

Huh. They actually do list traditional stuff in that database; or at least stuff that's been modified by Derek Scott. But yeah, I'd say they just didn't consider it a song and the fix you made works. -- Wendy (talk) 19:41, 22 February 2007 (UTC)

Hey Scarecroe, I've noticed that you've been restoring a lot of images that people have been uploading here. 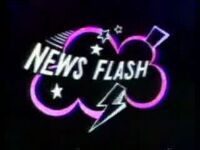 I know that you restored the image of the original 1971 Sesame Street News logo I uploaded (you darkened the background and removed the Noggin logo...) 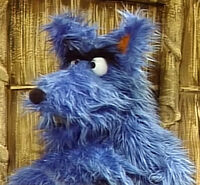 You also restored the Big Bad Wolf image I put up, by focusing more on the wolf and correcting the color...

Hey, just so you know, I took Lynne Thigpen off of the presidential list for now, since the only thing suggesting she was playing a President of the United States is a Wikipedia list. In the official Bicententennial Man film credits, she's identified as "Female President," and another actor as "Male President." Which either means in the film's world there's two American presidents, or they're presidents of something else, whether colleges or other countries. I haven't seen the film, but I know Wikipedia and other similar lists have mistakenly included fictional university presidents. -- Andrew Leal (talk) 21:23, 18 February 2007 (UTC)

Thigpen played President Marjorie Bota in Bicentenial Man. The film takes place over the course of 200 years so there are more than one president present in the film. But she is one. -- Brad D. (talk) 21:31, 18 February 2007 (UTC)

The edit I removed was my own. I added that they were named after tools or equipment to the first paragraph, but then I saw that same point was made further down. Since it predated my edit, I removed mine, since I was repeating something that was already there. HalfShadow 17:47, 18 February 2007 (UTC)

Sorry about that, I only saw the links you'd changed to old redirects, one of which doesn't work anymore. I guess we both need to be more careful when comparing old versus new edits. Thanks for pointing that out. — Scott (talk) 17:59, 18 February 2007 (UTC)

Hey dude: I just noticed that there's a link from Jason Kingsley through an ISBN number to Special:Book sources, and then from that page to Amazon. We may have talked about it and I forgot, I dunno, but it seems odd to me. I can't find other cases where we link an ISBN number to that page (although I didn't look very hard). Why does Kingsley's book need it? -- Danny (talk) 16:48, 18 February 2007 (UTC)

Hey, Scott! Now that the blizzard up here is lifting (6-9 degrees and about 4 feet of snow for the past few days), I have a lot of laundry to catch up on, plus school stuff (dossier deadlines coming up), job hunt for next year, etc., so I probably won't be on the Wiki as much for the rest of the weekend. However, when I get the time, Linda Bove is next on my list. I managed to grab this image of her from Children of a Lesser God. But as per our previous image discussion, I'm not sure it looks right, i.e. if it's squashed, plus shading, etc. I consider you more of our expert in that department, so if you could touch it up, that would be greatly appreciated. Thanks! -- Andrew Leal (talk) 02:37, 18 February 2007 (UTC)

You did. And half the time (or maybe all the time, and I just don't notice it otherwise), they end up scrunched like that. It never happened to me with InterVideo. And it seems to only apply to commercial DVDs; my screengrabs from The Earth Day Special, which I'd burned, were perfect. I wish I knew what the problem was, or the solution outside of either paying for a new player, or the easier route, just having you fix any that need it. -- Andrew Leal (talk) 02:44, 18 February 2007 (UTC)

I'm happy to keep fixing them of course, but it's my guess that there's a setting in the program that would retain the aspect ratio. If you felt like looking for it. — Scott (talk) 02:46, 18 February 2007 (UTC)

Oh, duh. Somehow, that was accidentally turned off. Which explains why it only did that with commercial DVDs (mostly widescreen, of course) and not my videos, or older non-widescreen films. Hooray! -- Andrew Leal (talk) 02:48, 18 February 2007 (UTC)

I'm happy. An Israeli friend of mine, who won't register, but has otherwise gone beyond the call of duty, translated the Hebrew Wikipedia entry on Rechov Sumsum, the cast portions anyway, and dug up some images, links, and quotes which he also translated. So, meet Gilles Ben-David, the man behind Moishe Oofnik. I'd been putting off creating a page for him until I could check with him, and he came through in spades. -- Andrew Leal (talk) 01:30, 17 February 2007 (UTC)

I just checked with my friend. Shalom Sesame aired as Shalom Sumsum on Israeli TV. But it wasn't bilingual, everything was dubbed. The Israeli actors and a few others looped their own dialogue, but most of the celebs were dubbed. So Dov Reiser, who voiced Cookie Monster, dubbed Itzhak Perlman! -- Andrew Leal (talk) 02:55, 17 February 2007 (UTC)

Per your request on the list, User:Scarecroe/Redirects shows all current redirects. We're hoping to get a toolserver (like Wikimedia's) in future, which will allow you to run queries like this on a copy of the database. Angela talk 21:50, 16 February 2007 (UTC)

I don't suppose you managed to save A Walking Tour of Sesame Street while it was on YouTube (now nuked, naturally). I'm still doing bits here and there on Will Lee (when children of a Lesser God finally arrives and time allows, I plan to tackle Linda Bove next), and it just occurred to me that a shot of him with James Earl Jones might be a useful way to illustrate the teaching section. -- Andrew Leal (talk) 20:00, 16 February 2007 (UTC)

Yay! It fits perfectly. I'm still mining the occasional bit from Jay Williams' book Stage Left, but for the most part, I think this has shaped up nicely, as the most in-depth cast bio we have so far (and one where the info was more scattered; Bob McGrath needs a lot of work, but there's his official site, and plenty of interviews to mine from). -- Andrew Leal (talk) 21:38, 16 February 2007 (UTC)

Retrieved from "https://muppet.fandom.com/wiki/User_talk:Scarecroe?oldid=202338"
Community content is available under CC-BY-SA unless otherwise noted.