Scooter in his movie usher outfit from The Muppets Take Manhattan was featured in series 8 of the Jim Henson's Muppets action figure line made by Palisades Toys.

Scooter's head sculpt was updated from the Scooter Action Figure from series 3, this time with smaller glasses. He is also a bit skinnier and has more articulation points. The back of his brown jacket reads "Muppet Theater", which was not in the movie.

Usher Scooter is the only figure in any regular series to come with only one accessory, namely a large, old-fashioned popcorn cart. In the movie, Scooter was responsible for handing out 3-D glasses, while it was the Swedish Chef who served popcorn. 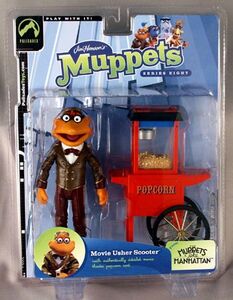 Add a photo to this gallery
Retrieved from "https://muppet.fandom.com/wiki/Usher_Scooter_Action_Figure?oldid=1102412"
Community content is available under CC-BY-SA unless otherwise noted.