He replaced Henning Venske on the show, and was usually paired with Lilo, played by Liselotte Pulver, to interact with Samson, Tiffy, Finchen, and Uli von Bödefeld in the street scene frame stories. His successor was Manfred Krug.

Friedrichsen was active in German film and television beginning in the 1950s, initially in small roles as students. He had co-starring parts in the scifi film No Survivors Please (1964) and the Edgar Wallace krimi The Gorilla of Soho (1968, as the sergeant, with Franz Otto Krüger). On television, he was sidekick Jones Burthe on John Klings Abenteuer (1965-1966, revived 1969-1970) and in 1973, he starred on the English-language ITV production Elephant Boy (as wildlife reservation caretaker Karl Bergen).

After leaving Sesamstrasse, Friedrichsen starred as customs agent Zaluskowski on the crime series Schwarz Rot Gold (aired intermittently betwen 1982-1996). He made guest appearances on Der Alte, Derrick, Unser Charley, and other series. As a voice actor, he dubbed Danny Glover in the Lethal Weapon movies, David Warner in the miniseries Holocaust, and Jon Voight in Midnight Cowboy. 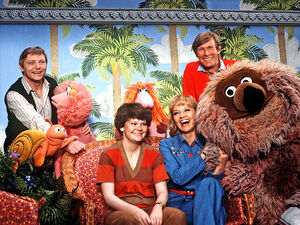 Retrieved from "https://muppet.fandom.com/wiki/Uwe_Friedrichsen?oldid=1079344"
Community content is available under CC-BY-SA unless otherwise noted.