Vanessa Williams (b. 1963) played the Queen of Trash in the 1999 film The Adventures of Elmo in Grouchland and played Calypso in the Creature Shop production of The Odyssey.

In 2006, she was one of the headliners in the PBS special A Capitol Fourth. She shared the stage with Elmo, singing "How Do You Do?" Elmo previously appeared in her 1996 Christmas special, Vanessa Williams & Friends: Christmas in New York.

On November 13 2011, a promo for the following episode of Desperate Housewives (serving also as a teaser for The Muppets), showed her fighting with Miss Piggy over Kermit the Frog on the set of ABC's dramedy.

On Broadway, Williams has appeared in the Stephen Sondheim musicals Into the Woods and Sondheim on Sondheim. Television credits include playing Wilhelmina Slater on Ugly Betty, a regular on Desperate Housewives for two seasons and guest appearances on Star Trek: Deep Space Nine, The Fresh Prince of Bel-Air, The Love Boat, the musical guest twice on Saturday Night Live, and the feature film Hannah Montana: The Movie. 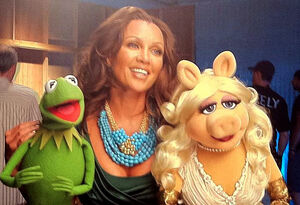 Desperate Housewives promo (2011)
Add a photo to this gallery

Wikipedia has an article related to:
Vanessa L. Williams
Retrieved from "https://muppet.fandom.com/wiki/Vanessa_Williams?oldid=1224799"
Community content is available under CC-BY-SA unless otherwise noted.