View-Master Interactive Vision was an interactive VHS console game system, introduced in 1988 by View-Master Ideal Group, Inc. The tagline was that the console was "the Two-Way Television System that makes you a part of the show!" The titles included four Sesame Street games, and two games featuring the Muppet Show characters, as well as a Disney game, Disney's Cartoon Arcade.

The system comes with a simple game controller which included a joystick and five colorful buttons. As the video plays, the characters address the player directly, and ask the player to make a choice by pressing one of the buttons. Simple videogames with graphics similar to the ColecoVision video game system are played during the course of the videotape. The Disney game is built around the "arcade-style" gameplay, including fighting ghosts and shoveling coal into a fireplace. The games were designed for audiences ages 3-8 years.

The video has two different soundtracks recorded, and the player's choices toggle back and forth between the soundtracks, giving the impression that the player has changed the course of the story.

For example, at the end of Muppet Madness, Kermit and Gonzo ask you to choose to hear the closing song from their point of view. In Kermit's version, the Muppets sing a closing number called "Everything Was Wonderful!" In Gonzo's version, the closing number is "Everything Was Terrible!" Similarly, a Muppets TV show within the program is either a science fiction series or a soap opera, depending on the soundtrack, and Fozzie Bear's comedy act is successful or unsuccessful.

Although there is only one video track, the optional parts of the soundtrack are designed to fit the movement of the Muppets' mouths, to create the illusion that the video was recorded with only one soundtrack.

In the game Muppets Studios Presents: You're the Director, Kermit the Frog leads the player through the process of making a Muppet movie. You can choose to either be the "good" director or the "bad" director. During the game you're asked to collect money bags as they show up onscreen. If you haven't collected enough, the closing song's lyrics say "We've just made some movies. We're gonna go broke!"

When the VHS tapes are played without the View-master console, information is visible on the sides of the screen. Something similar to an audio waveform appears at the left side of the screen, while bursts of barcode-like information occasionally appear at the right. 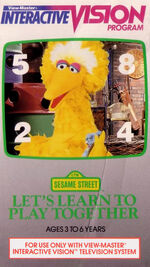 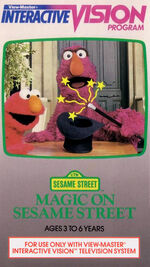 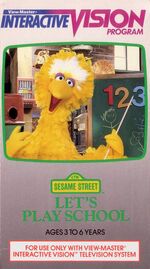 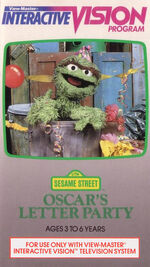 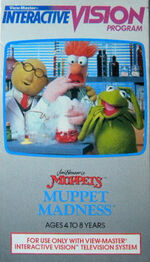 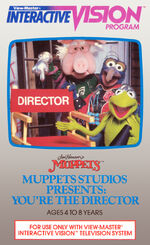 "Muppets Studios Presents: You're the Director"
Catalogue No. 7158