The Vikings were a historical Scandinavian people, best remembered as sea-faring raiders. Outside of the Muppets, Vikings can still be found in Minnesota.

Link Hogthrob and the pigs portrayed Vikings for a musical number, "In the Navy," in The Muppet Show episode 524.

In the Muppet Babies episode "Fozzie's Family Tree," Baby Piggy tells a tale of her own ancestry, involving "Piggy the Terrible" and her viking crew.

A group of Whatnot Vikings were also featured in The Muppets Celebrate Jim Henson.

On The Muppets' episode "Too Hot to Handler" Fozzie Bear records a couple of regional promos for Up Late with Miss Piggy. In the one for Minnesota, he poses as a viking.

In the German Sesamstrasse spin-off TV-movie Die Zeitmaschine, characters Wolle and Pferd accidentally time travel to a group of Vikings for an adventurous interlude. 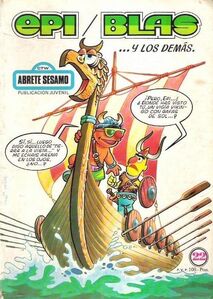 Ernie and Bert as vikings
on the cover of Epi, Blas y los demás
Add a photo to this gallery 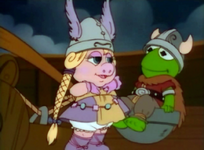 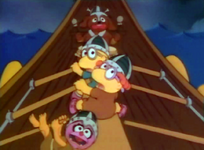 Add a photo to this gallery
Wikipedia has an article related to:
Viking
Retrieved from "https://muppet.fandom.com/wiki/Vikings?oldid=1301599"
Community content is available under CC-BY-SA unless otherwise noted.