Waldorf was featured in the sixth series of Palisades Toys' line of Muppet action figures (same series as the Statler Action Figure). Both hecklers came with the Victorian chair from their theater box, some Muppet vegetables, and a playbill. Each also had a special waist articulation, based around the hip mechanism.

Waldorf came with five cardboard score signs reading the numbers 2, 1.5, 1, 0 and -1. Statler and Waldorf kept score in episode 424 of The Muppet Show. The playbill featured a list of classic Muppet Show acts, such as "Mah Na Mah Na" and "Lady of Spain" by Marvin Suggs. 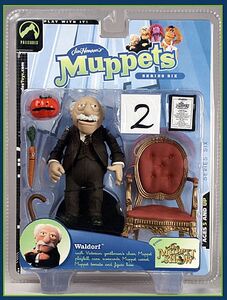 Retrieved from "https://muppet.fandom.com/wiki/Waldorf_Action_Figure?oldid=1308867"
Community content is available under CC-BY-SA unless otherwise noted.