After The Walt Disney Company had announced a deal to buy The Jim Henson Company in 1989, the two companies produced The Muppets at Walt Disney World, a primetime special that aired on The Magical World of Disney in May 1990, in which Kermit the Frog and his friends explored the resort.

According to the special, Walt Disney World lies "just on the other side" of Kermit's Swamp. The geography of the resort is also compressed and streamlined for purposes of the plot. For example, even though the Muppets begin their trip by breaking into the Disney-MGM Studios, they don't seem to have the same problem entering the Magic Kingdom or EPCOT Center, even though each park has a separate gate.

Attractions featured or mentioned in The Muppets at Walt Disney World include:

Although the Disney/Henson deal fell through in the wake of Jim Henson's death, some of the initial plans for Muppet attractions at Walt Disney World were completed, most of which were located at the Disney-MGM Studios.

The first attraction to feature the Muppets was the Hollywood's Pretty Woman stage show at the Theater of the Stars on Hollywood Boulevard, which included Kermit and Miss Piggy walk-arounds in the surprise finale. The show, which premiered in December of 1989 was the only Walt Disney World attraction that was finished in Jim Henson's lifetime.

In 1990, the Here Come the Muppets stage show, the first full-fledged Muppet attraction at the parks, premiered at the former Walt Disney Theater in the park's Animation Courtyard. The production featured walk-around characters playing to a vocal track recorded by the Muppet performers. A second stage show, Muppets on Location: Days of Swine and Roses, followed in 1991, and played for three years.

Muppet*Vision 3D, an elaborate attraction featuring a 3D film with Audio-Animatronic characters and in-theater special effects, was introduced in 1991, along with the Stage 1 Company Store, which specializes in Muppet merchandise. Muppet*Vision 3D is still a popular attraction at the park and was recreated for Disney California Adventure in 2001, although the latter version of the attraction has since closed. Constantine was added to the attraction's pre-show in 2014 to promote Muppets Most Wanted.

Muppet*Vision 3D, which was the last film directed by Jim Henson, was also the last of the originally planned attractions to be built. The attraction was originally slated to anchor a new Muppet Studios section of the park, nestled between Star Tours and New York Street. But when the Disney/Henson merger fell through, plans to build the Muppet Movie Ride and the Great Gonzo's Pandemonium Pizza Parlor were abandoned.

Walk-around versions of Kermit, Piggy, and Sweetums appeared in the park's Disney Stars and Motor Cars Parade. And the first new attraction to feature the Muppets since Disney acquired the characters in 2004 was the Muppet Mobile Lab, an interactive "Living Characters Initiative" starring Audio-Animatronic versions of Dr. Bunsen Honeydew and Beaker.

Weatherproof versions of Kermit and Piggy appeared in Disney's Honorary VoluntEars Cavalcade in 2010. The parks also hosted Epcot Muppet Scavenger Hunt, and the Epcot International Flower and Garden Festival which has featured topiary likenesses of Kermit and Miss Piggy. The 2019 Festival debuted a new Kermit topiary riding a bicycle.

Constantine made a live appearance at the Villains Unleashed event at Disney's Hollywood Studios park on August 23, 2014. The meet and greet was set up inside the Muppet giftshop with Constantine caged inside a small Gulag cell.

In 2016, the area where Muppet*Vision 3D is located was temporarily renamed Muppets Courtyard. This year also saw the opening of two more Muppet attractions: the restaurant PizzeRizzo (replacing Pizza Planet) and the live show The Muppets Present… Great Moments in American History, which played regularly in Liberty Square at the Magic Kingdom for three years.

A photo of Jim Henson (and Kermit) can be glimpsed in the film montage of American heroes near the end of the "American Adventure" attraction at the host pavilion (America) in Epcot's World Showcase. In 2020, a Muppet-themed restaurant would come to the American Adventure Pavilion in the form of the Regal Eagle Smokehouse, themed around Sam the Eagle.

A tile mosaic portrait of Jim Henson and Kermit was originally on display at the Academy of Television Arts and Sciences Hall of Fame in Disney MGM Studios. It hung next to portraits of Fred Rogers and Burr Tillstrom.

Other Henson properties that were given attractions at Walt Disney World include: 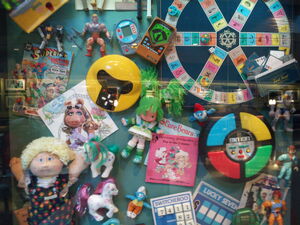 Disney's Pop Century Resort is themed for the decades of the 20th century. It's main hall features a timeline of pop culture items framed in glass cases. A photo from The Miss Piggy Cover Girl Fantasy Calendar is featured in this case from the early 1980s. 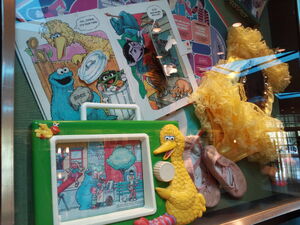 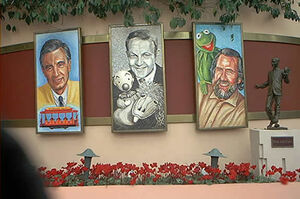 Tile mosaic portraits of Fred Rogers, Burr Tillstrom and Jim Henson at the Academy of Television Arts and Sciences Hall of Fame.

Wikipedia has an article related to:
Walt Disney World
Community content is available under CC-BY-SA unless otherwise noted.
Advertisement