Walt Dizzy is a movie director who appears in a season 27 episode of Sesame Street. He is a spoof of Walt Disney, although his appearance is more reminiscent of Steven Spielberg.

He comes to the street looking for someone to play the lead role in his upcoming film, The Chicken King. Telly is most interested and spends the episode trying to perfect his chicken performance for Walt, who eventually gives the role to Elmo instead. Walt comforts Telly, assuring him there are other roles in the film for him.

Mr. Dizzy returns with a finished film not long after ("I'm quick and I'm cheap. Hollywood loves me.") and screens it for the monsters and Susan. He heads off to cast his next film, The Dog Prince, which the monsters also want in on.

Dizzy's official movie logo is a combination of various movie studios' - the Walt Disney name, the Warner Bros. shield and the MGM filmstrip circle (with a chicken substituting for the lion). 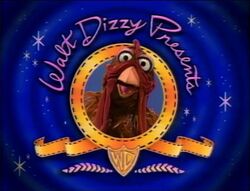 Walt Dizzy Presents
Add a photo to this gallery
Retrieved from "https://muppet.fandom.com/wiki/Walt_Dizzy?oldid=1102617"
Community content is available under CC-BY-SA unless otherwise noted.