Walt Frazier (b. 1945) is a former professional basketball player who spent ten years with the New York Knicks (1967-1977) and is currently a commentator on their games.

Together with Mike Riordan and Dick Barnett, he was one of the first three basketball players to appear on Sesame Street.[1]

Frazier was featured in several inserts, such as playing basketball with his teammates in Episode 0158. In one segment, the 6' 4" Frazier appeared with Mr. Hooper and one of the Kids to demonstrate tall, taller, and tallest. 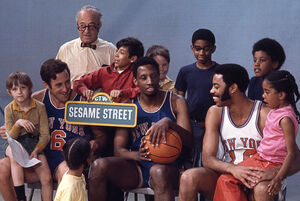 Wikipedia has an article related to:
Walt Frazier
Retrieved from "https://muppet.fandom.com/wiki/Walt_Frazier?oldid=1079443"
Community content is available under CC-BY-SA unless otherwise noted.