Wanda Cousteau is a fish explorer who debuted on Sesame Street in season 24.

Wanda wears a diver's helmet filled with water, so she can explore on land. As she explains it, "My mission is to explore strange new worlds, to seek out new life and new civilizations — to boldly go where no fish has gone before!," a phrase she would often use (with variations depending on what she was exploring).

For her first appearance in Episode 3128, Wanda's helmet was an evenly spherical dome. Although it provided a clear view of her face and head from all angles, the reflective surface picked up the bright lights of the studio. When she appeared the following season in Episode 3161, the helmet was redesigned with a frosted surface to help mitigate the studio lights. A flat surface was placed in the front of the helmet for the character to see out of, but obscured some of her features.

She appeared once more for a Street story in Episode 3191, again in the repeated song "A Fish Outta Water", and then disappeared until fifteen years later in Episode 4201 (performed by Joey Mazzarino) making a stop at the laundromat. 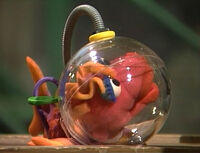 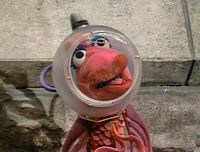 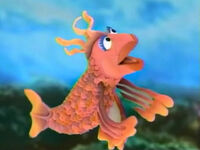 in her natural habitat,
singing "A Fish Outta Water"